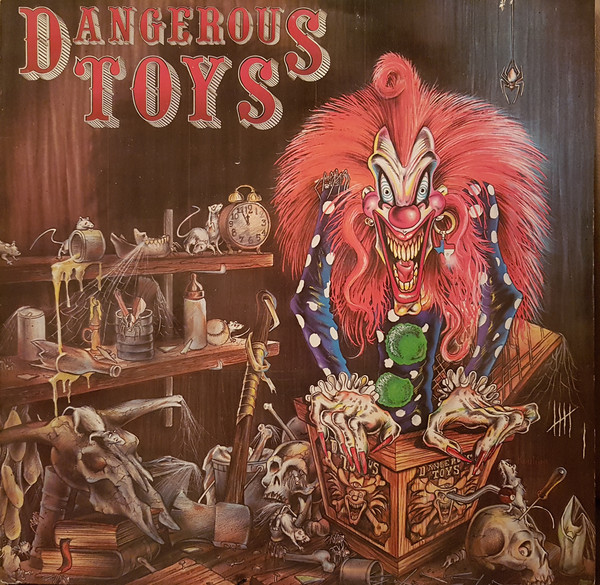 I wonder how many thrash fans in the 80’s expected the original vocalist of Watchtower to later form a southern heavy/glam metal band. I don’t suspect many did expect it, the jump between the chaotic thrashfest that is Watchtower’s fantastic debut Energetic Dissasembly and the fun party vibe of Dangerous Toys’ self-titled debut is pretty immense. Despite the contrast, both albums are underrated classics in their respective styles. That vocalist is Jason McMaster, and in my opinion also underrated as a vocalist in both genres.

Dangerous Toys starts out with one of the best songs on the album, which immediately sets the fun mood of the album. ‘Teas’n, Pleas’n’ with its southern swagger and the attitude of McMaster’s screeching vocals show what this album’s all about. My personal favorite on the album, ‘Take Me Drunk’, continues in this fashion with one of the best riff hooks in glam metal. This is one of those songs that just lets every band member shine, especially the rhythm section. Drummer Mark Geary’s stomp of a performance during the chorus coupled with Mike Watson’s thumping bass makes it nearly impossible to not want to stomp your foot or bang your head. Songs like ‘Outlaw’, ‘Here Comes Trouble’, and ‘That Dog’ are simply pure 80’s heavy metal at its best, and the end of ‘Outlaw’ displays another pounding performance from Geary.

Now while Dangerous Toys does mark a couple of the checkboxes of many glam metal bands, such as the obligatory power ballad with ‘Feels Like a Hammer’ and the sleazy lyrics, Dangerous Toys sets themselves apart from other bands of the genre in a multitude of ways. Right off the bat, one look at the band and they don’t look like your average glam band in image. With the bullet-belts and Death shirt, they don’t exactly look the part. Already mentioned is the strong southern rock influence in some of Scott Dalhover’s guitar riffs, but there’s also the occasional thrash hook. Maybe it’s a nod to McMaster’s previous band Watchtower, but whatever the reason it works wonders in tracks like ‘Bones in the Gutter’, ‘Ten Boots (Stompin’)’, and briefly but surprising in the southern sleaze of ‘Sport’n a Woody’.

While Dangerous Toys continue to occasionally tour to this day, the band hasn’t released any new material since 1999’s live album Vitamins And Crash Helmets Tour Live. Who knows if the band will ever release another album, but regardless Dangerous Toys is a hidden heavy metal gem. If you’re a fan of classic metal, hair bands, or heavy southern rock, this is not an album that should be missed.

Written by Khaliq Jordan for The Frying Pan.
More reviews by Khaliq:
https://fryingpanmedia.com/author/khjordan/