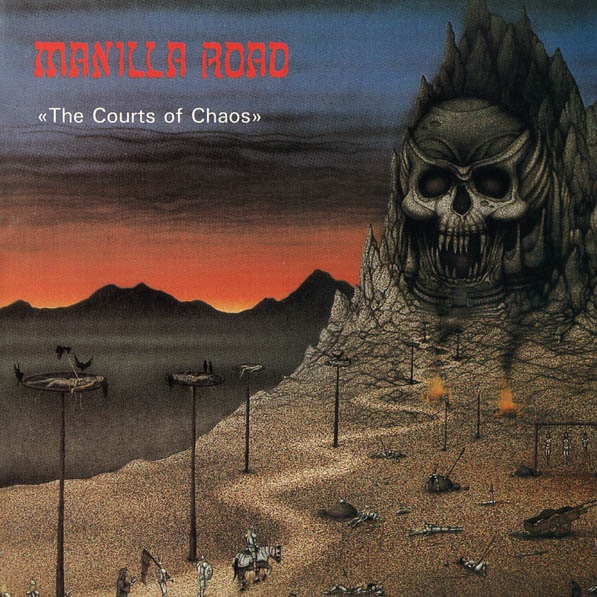 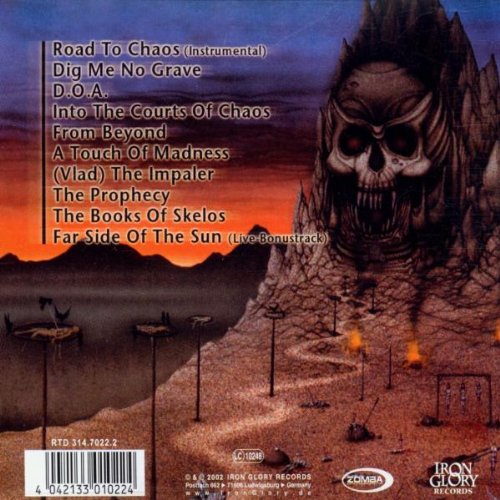 MANILLA ROAD
| THE COURTS OF CHAOS |
BLACK DRAGON
1990, LP
July 27th of 2018 brought sad news to metal fans. Mark Shelton, the vocalist/guitarist frontman of legendary heavy metal band Manilla Road, suffered from a heart attack after a gig in Germany. Manilla Road was a band that unfortunately never seemed to get the attention they deserved in their heyday, but they had developed quite a cult following as the years went by. Now their 1983 album, Crystal Logic, is considered to be a classic by many. I love that album, but I thought I’d give some appreciation to what I consider to be their best album and the one that got me into this behemoth of a band.
1990’s The Courts of Chaos was their final album before their hiatus in 1992 (Not counting the Circus Maximus album, which wasn’t meant to be released under the Manilla Road name), and marks the end of their row of classic albums that arguably started with the aforementioned Crystal Logic (Personally I really like 1980’s Invasion too, but that’s more of a 70’s-styled metal album). The Courts of Chaos drew me in with it’s haunting cover art, and did its job well. Manilla Road brought together all the elements of their sound that they had developed over time. It feels like many of the previous albums were leading up to an unleashing of all that made them great which is what’s displayed on this album.
After the instrumental ‘Road to Chaos’ which does a good job at opening the album and setting a mood, you get hit with the dirge of ‘Dig Me No Grave’ which is one of the finest combinations of thrash metal and doom metal out there and probably my favorite song from the band. By a doom and thrash combo, I don’t mean slow-tempo thrash such as Slayer’s famous title track from South of Heaven, I mean a blend of styles and vibes from both genres. The riffing comes right out of the halls of thrash, while the song is engulfed in a grandiose yet brooding atmosphere reminiscent of classic doom metal bands such as Saint Vitus. ‘(Vlad) The Impaler’ is an all-out thrasher, and one of the few songs on the album to stick to one style of metal, and it is excellent at that.
The majority of the album is dominated by a blend of heavy metal, thrash metal, and doom metal. While previous albums mixed all these genres throughout their run time, The Courts of Chaos combines most of these in pretty much every song, making for both a consistent and varied album. There is also variation in emotion as well, with the aforementioned ‘Dig Me No Grave’ being followed by the beautiful ‘Into the Courts of Chaos’. This album’s variation is not heard better than in the eight-minute epic of ‘The Books of Skelos’ that acts as a perfect finale to the album. The beginning is softer and has some of Shelton’s most beautiful melodies on both vocals and guitar, before getting thrown into a rampage of thrash heaven with some of his most spitting riffs and vocals. Drummer Randy Foxe gives an especially excellent performance on this track, his drum fills mixes with subtle hits of the cymbal during the beginning and the contrast works really well. Bassist Scott Park gets some shining time as well, with an short but fantastic solo bass hook in the middle of ‘The Prophecy’.
While Crystal Logic might be the ‘classic’ Manilla Road album that will make it onto lists of essential 80’s heavy metal albums, The Courts of Chaos is a stunning album that would have served as the best swansong had the band not continued on after their hiatus. As it stands, The Courts of Chaos is a bit of an underrated gem and one that I think has excellent appeal among a variety of classic metal fans. Whether your favorite genre be thrash, doom, or heavy metal, all will find something to like in this masterpiece.
Written by Khaliq Jordan for The Frying Pan.
More reviews by Khaliq:
https://fryingpanmedia.com/author/khjordan/